Vanessa-Mae made Guinness World Record by becoming the youngest soloist to record both the Beethoven and Tchaikovsky violin concertos at the age of 13. Over the years, her conservative classical style gave way to a more modern outlook and she developed her own crossover style – something she will demonstrate in Budapest during her upcoming concert on May 24. The former violin prodigy, now 40, tells Diplomacy&Trade about her two loves: music and skiing.


“I celebrate the whole world with my music, but in sports I could represent only one country.”

Violin virtuoso Vanessa-Mae first picked up a fiddle at the age of four (having already started the piano a year before). Her first ski lesson also took place around that time. “My mother introduced me to skiing when I was little, but later, she was strongly against it. She considered this sport far too dangerous, similar to horse-riding, hockey and handball. I gave up playing the latter ones, but skiing was different. To me skiing symbolizes freedom and something away from music. Music is my passion. It is the essence of who I am. Skiing, on the other hand, is my dearest hobby,” says the artist who, since 2009, resides in the Swiss Alps, in Zermatt, a little town lying at the foot of the 4,478 meter Matterhorn. The region is called ‘Matterhorn glacier paradise’ and it is Europe's largest and highest lying summer skiing region – the best place to be, especially if one decides to train for the Winter Olympic Games. “It has been my dream to be a ski bum since I was 14. This is something I am determined to do,” Vanessa-Mae stated back in 2013, hoping to represent Thailand as a downhill skier at the 2014 Winter Olympics in Sochi, Russia. “I am a British citizen but I also hold a Thai passport. My Thai father, like most Thais, has never skied but he was really excited about me doing this,” she said upon being accepted by the National Olympic Committee of Thailand to represent the country. Following tireless training, she did, indeed, make it: qualifying for and participating at the 2014 Winter Olympic Games, competing under the name Vanessa Vanakorn (her father's surname), Vanessa-Mae became an Olympian. She finished 67th in her giant slalom alpine race at the Olympics – almost a minute behind Tina Maze, who took gold – but ahead of a quarter of the racers who didn’t even make it to the finish line. “I didn’t know that coming last would still be such a good feeling,’ she said. What I realized after Sochi is that it is better to have done something, even if not perfectly, than not to have done it at all. Of course there is a risk that I could break something, but life is short and you have to live it fully.” Her unique bridge from artist to athlete also led to her being the guest of honor at the first ever International Olympic Committee President’s Dinner. On the question whether she would ever give it another go with the Olympics, Vanessa- Mae reveals that it was, for a while, her intention to qualify for the 2018 Winter Games, but an awful ski crash during a race on December 4, 2017 dislocated her shoulder so badly that it ruled out making the qualifying grade in late January. “I was operated on last year in April and am thankfully fit again. It’s time for a new album and I’m also working on my autobiography,” she says. “Living my dream of being a ski bum is great but the best job in the world is being on stage, making music.” She says she will however continue to ski. “It is the setting, that I adore most in skiing. I love the purity of the air, the backdrop of the Alps – I feel inspired and humbled when I ski – mountains do that to me. But away with the hard and endless trainings! Now I have more time to dedicate to music. Crossover music is so wonderful in helping free inhibitions and creating fantastical worlds, for both the artist and the listener. I hope in my way to do some good with my new music. I know I am good at it, and it feels great to make magic with music: it’s almost like I am able to move mountains.”

She made her world debut in 1988 to a sensational reception at the Schleswig Holstein Festival in Germany and made her UK debut with the Philharmonia Orchestra that same year. In 1991, at the age of 12, she was invited by the London Mozart Players to headline their Mozart Bicentenary tour of the Far East and was the youngest artist ever to play as a soloist with the orchestra. At the age of 13, she had already recorded three highly-praised classical albums. With the release of her debut album, The Violin Player, in 1995, she become a globe-trotting star. Her brave approach of presenting the violin in a new style caused controversy among some traditionalist critics but its enormous popularity around the world established her as a world star and subsequently inspired a wave of new artists to follow in her footsteps. She has sold over 10 million albums, holds over 40 international awards for both pop and classical recordings, and her concert specials have been broadcast in over 100 countries.

Vanessa-Mae is a dynamic live performer with a grueling touring program that has taken her around the world several times over. She has visited over 50 countries and performed in spectacular venues such as the Kremlin Palace in Moscow, Hyde Park in London and the Acropolis in Athens. She made her US debut in Times Square where she hopped spontaneously onto a passing yellow taxi - an explosive performance seen all over the world. She gave the first ever concert on the famous frozen lake of St. Moritz, making a spectacular entrance to the stage by delta-gliding down from a 2,500m mountain. She was the only foreign artist invited by the Chinese to perform at the pivotal historical moment of Hong Kong’s reunification to China. Vanessa-Mae has supported charities worldwide including the Royal Society For The Prevention Of Cruelty To Animals, and she is an ambassador of Cruelty Free International. 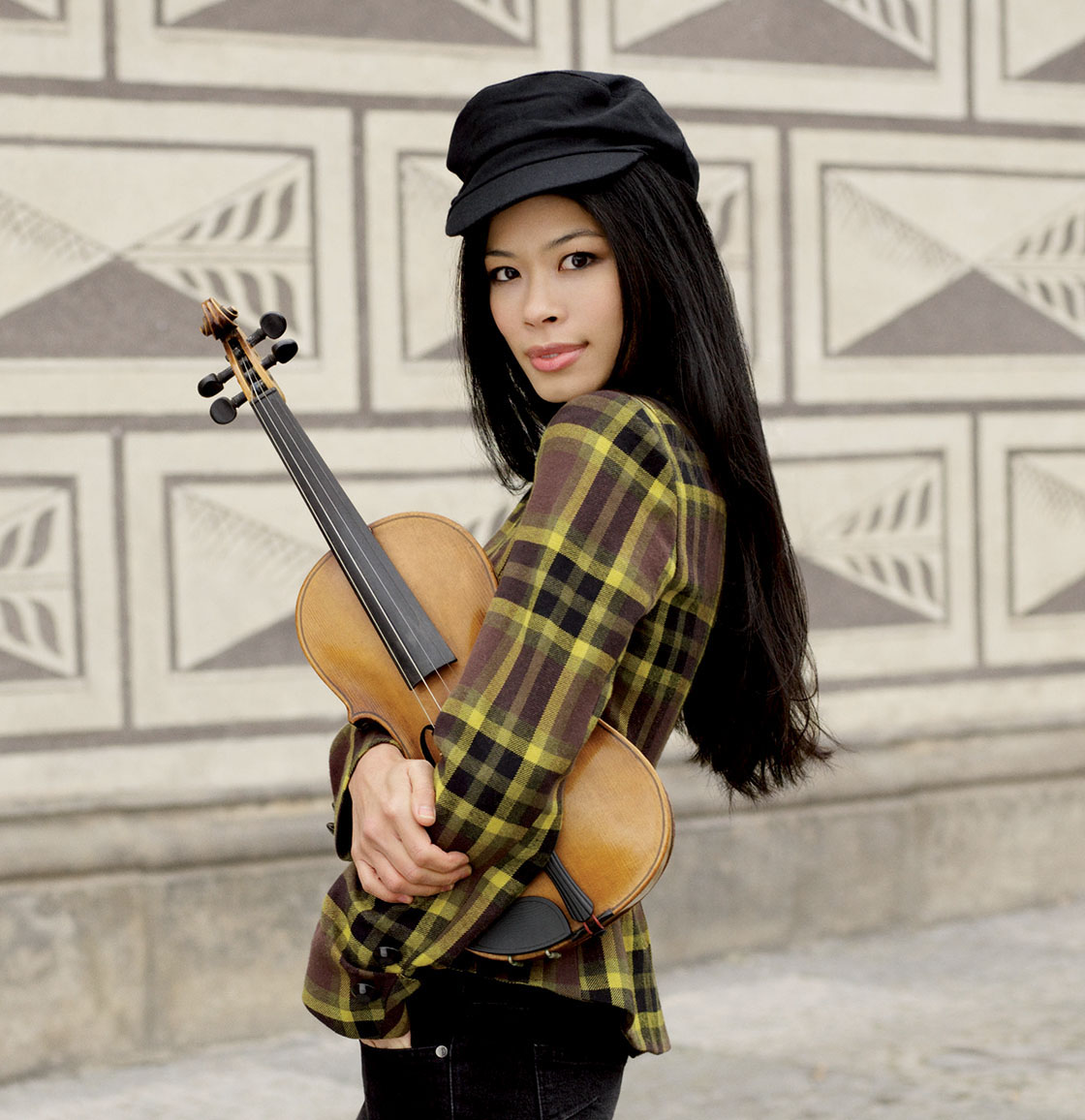 Sharing her birthday with the legendary violinist, Nicolo Paganini, Vanessa-Mae Vanakorn Nicholson was born 196 years later on October 27, 1978 in Singapore, to a Chinese mother, Pamela Soei Luang Tan and Thai father, Vorapong Vanakorn. She was four when her parents split up; her mother married a British lawyer and moved to London with her daughter. She was nicknamed ‘Teeny Paganini’ when, at just eight, she became the youngest pupil at the National Conservatory of Music in Beijing, studying with Professor Lin Yao. Eventually she returned to London and entered the London’s Royal College of Music to continue honing her technique.

Fusing the worlds of music and sport, Vanessa-Mae was invited to play the national anthem at Wrigley Field, at Comiskey Park and at the World Alpine Ski Championships in Vail Colorado. She has also performed at the opening ceremony of the Winter Paralympics in Salt Lake City Utah and the opening race of the F1 Grand Prix season in Melbourne. She ran as an Olympic Torch Bearer as the Olympic Torch Relay passed through London on its way to the Olympic Games in Beijing.

She has contributed to a number of film projects, including Walt Disney Pictures’ Mulan. ABC’s Arabian Nights and recorded Roxane’s Veil, written for her by Vangelis for her album Choreography, which was later used on the soundtrack album of Oliver Stone’s film Alexander. Vanessa-Mae was the subject of a highly acclaimed BBC science documentary which analyzed the relative roles of nature and nurture in creating her extraordinary talent. She was voted one of the “50 Most Beautiful People In The World” by People magazine and one of the “World’s 100 Sexiest Women” by FHM. She created a sensation at Paris fashion week with her catwalk debut for Jean-Paul Gaultier’s show where she gave a surprise impromptu performance with her violin while modelling the show’s finale - the wedding dress.